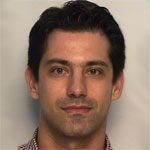 
Nikolaos Papandreou received his Diploma (5-year program) and Ph.D. degree, both in Electrical and Computer Engineering, from the University of Patras, Greece, in 1998 and 2004, respectively.

He joined IBM Research - Zurich in 2008, where he is working on memory technologies with emphasis on multi-level phase-change memory and NAND flash memory. His research interests focus on device characterization and reliability, signal processing and coding, FPGA design and HW systems prototyping.

Before joining IBM, he was Research Associate (2005-2008) at the Dept. of Electrical and Computer Engineering, University of Patras, where he worked in various projects in the areas of digital communications and embedded systems. Between 2006 and 2008, he also served as an Adjunct Faculty Member at the Dept. of Computer Engineering and Informatics, University of Patras.

Dr. Papandreou holds over 40 US and European patents in the area of solid-state memory technology. He is a Senior Member of the IEEE and a member of the Technical Chamber of Greece. He is a regular reviewer for scientific journals and conferences and he has served as a TPC member for various IEEE conferences including GLOBECOM, ICC, WCNC, ICNC, ISCC, ISPLC.