This workshop is open to the HPDC15 organizers and the entire IBM community.

Richard Vuduc - Georgia Institute of Technology
How much time, energy, and power does my algorithm need? 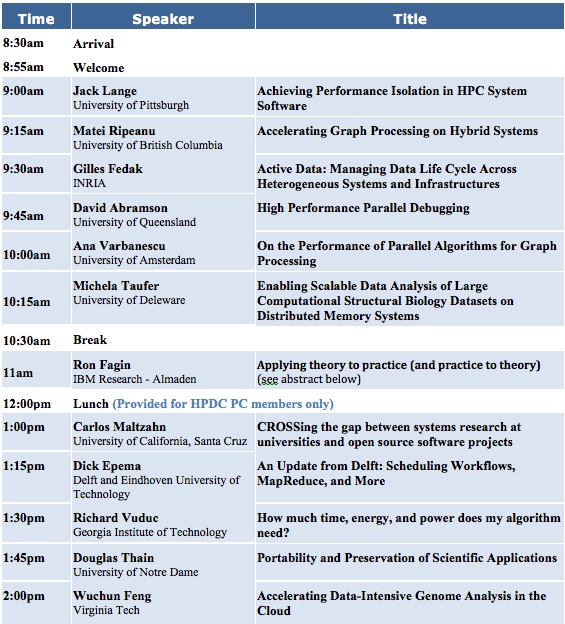 Keynote: Applying theory to practice (and practice to theory)

Speaker: Ronald Fagin, IBM Research - Almaden
Abstract:
The speaker will talk about applying theory to practice, with a focus on two IBM case studies.  In the first case study, the practitioner initiated the interaction. This interaction led to the following problem.  Assume that there is a set of “voters” and a set of “candidates”, where each voter assigns a numerical score to each candidate.  There is a scoring function (such as the mean or the median), and a consensus ranking is obtained by applying the scoring function to each candidate’s scores.  The problem is to find the top k candidates, while minimizing the number of database accesses. The speaker will present an algorithm that is optimal in an extremely strong sense:  not just in the worst case or the average case, but in every case!  Even though the algorithm is only 10 lines long (!), the paper containing the algorithm won the 2014 Gödel Prize, the top prize for a paper in theoretical computer science.

The interaction in the second case study was initiated by theoreticians, who wanted to lay the foundations for “data exchange”, in which data is converted from one format to another.  Although this problem may sound mundane, the issues that arise are fascinating, and this work made data exchange a new subfield, with special sessions in every major database conference.

This talk will be completely self-contained, and the speaker will derive morals from the case studies. The talk is aimed at both theoreticians and practitioners, to show them the mutual benefits of working together.

Ronald Fagin is an IBM Fellow at IBM Research – Almaden. Ron received his B.A. in mathematics from Dartmouth College and his Ph.D. in mathematics from the University of California at Berkeley. He is a Fellow of IEEE, ACM, and AAAS (American Association for the Advancement of Science). He has co-authored four papers that won Best Paper Awards and three papers that won Test-of-time Awards, all in major conferences. One of his papers won the 2014 Godel Prize. He was named Docteur Honoris Causa by the University of Paris. He won the IEEE Technical Achievement Award, IEEE W. Wallace McDowell Award, and ACM SIGMOD Edgar F. Codd Innovations Award (a lifetime achievement award in databases). He is a member of the US National Academy of Engineering and the American Academy of Arts and Sciences.