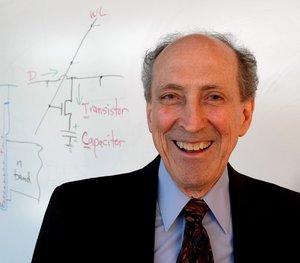 Where the work was done: IBM T.J. Watson Research Center

What we accomplished: Dennard (pictured) invented  dynamic random-access memory. DRAM is the ubiquitous memory used from cellphones to laptops to servers. Since it is only 1-transistor, DRAM has generally subsumed 6-transistor Static RAM due to its smaller size and power.

DRAM is widely used in digital electronics where low-cost and high-capacity memory is required.

BACK TO PHYSICS
BACK TO IBM RESEARCH ACCOMPLISHMENTS