In 2014, there were an estimated 43.6 million adults in the United States (18.1% of the population) suffering from a mental illness (NIH). This figure does not take substance abuse disorders into account. The conservative cost estimate associated with severe mental illnesses, which affect about 6% of adult population, is over $300 billion per year.

Currently, the assessment of patients is done through a psychiatric interview. This interview is performed by a highly trained professional and requires between 30 and 90 minutes; this number does not take into account the time required to evaluate the interview afterward. This lengthy approach has not changed, in its essence, since the establishment of the discipline over a century ago.

We ask the question "how similar are words or sentences appearing closely in text?" Our measurements of coherence show a difference between patients who did not later convert to psychosis and those who did convert, as can be seen below:

We also create a visual representation of a person’s sentences; there are notable differences in graphs from patients with various psychiatric conditions as well as from people who are unaffected by these conditions. As an example, here is a speech graph from the "To be or not to be" speech from Hamlet. 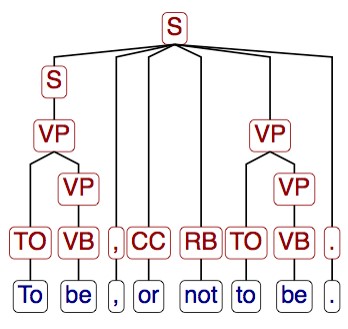 Previous work done by others has shown that acoustics can be used as a biomarker in Parkinson’s Disease (PD). PD is a neurodegenerative disease with about 50,000 new diagnoses each year in the United States alone. The combined direct and indirect costs of PD in the US is approximately $25 billion (pdf.org). The disease is characterized by loss of dopaminergic neurons. While there are different causes for this loss, the common denominator is in the symptoms: a host of motor and non-motor deficits. One of the four primary symptoms of PD is the Parkinsonian tremor which worsens with increased neuronal loss.

To build upon this previous work done in acoustics, we tracked the differences in air sound pressure and generated graphs from this data. The Parkinson’s patient showed much different pressure readings from unaffected individuals due to their tremors, as can be seen below.