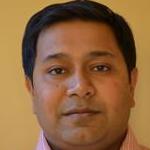 
He is a member of the Brain-Inspired Computing group at IBM Almaden Research Center, where he is working on large-scale simulations using the IBM Neuro Synaptic Core Simulator (Compass) as part of the IBM SyNAPSE Project. He is involved in the development of the Corelet Programming Language for programming the reconfigurable neuromorphic hardware. He is also involved in the development of algorithms and applications with networks of neurosynaptic cores for building cognitive systems.

Before joining IBM Research, he had worked at The NeuroSciences Institute and Los Alamos National Laboratory. He was also a visiting researcher at INRIA Sophia-Antipolis . He completed his PhD at Iowa State University in 2005 under the supervision of Prof. Arun K. Somani.

He has authored in several international journals and conferences, and is a member of the Institute of Electrical and Electronics Engineers (IEEE) and ACM.